We want to understand how cellular physiology is controled by basic molecular and cellular pathways regulating the biology of potassium-selective ion channels.

Two-pore domain potassium channels (K2P) play a central role in the control of cellular excitability and the regulation of the cell's electrical membrane potential. K2Ps have been widely conserved throughout evolution. They are polymodal ion channels that are subjected to extensive regulation by a diverse set of physical (pH, temperature, mechanical force) and biological signals (lipids, G-protein coupled receptor pathways). They are broadly expressed in excitable and non-excitable cells, and have in turn been implicated in a large spectrum of physiopathological processes, ranging from the regulation of neuronal excitability, respiratory and cardiac function to the control of cell volume, hormone secretion and cell proliferation. Recently, loss- and gain-of-function mutations in K2P channels have been directly linked to human pathologies (Birk Barel syndrome, familial migraine with aura, cardiac conduction disorder, FHEIG neuro-developmental disorder).

In contrast to many other ion channel families, comparatively little is known about the molecular and cellular processes that regulate different aspects of the cell biology of K2P channels. For instance we know only of very few factors that specifically regulate the expression, the activity and the localisation of K2P channels at the cell surface. Therefore the central question addressed by our team is: How is the number of active two-pore domain potassium channels present at the cell surface controlled in vivo?

To identify novel genes and conserved cellular processes that regulate the biology of K2P channels in vivo we take advantage of the powerful genetic tools available in the model nematode Caenorhabditis elegans. We use the full array of techniques available in C. elegans including genetics, live imaging, electrophysiology and state-of-the-art CRISPR/Cas9 genome engineering and next-generation DNA sequencing. These studies will provide new leads to understand the cellular pathways that control K2P function in other organisms.

The starting point for our genetic screens are gain-of-function mutants of K2P channels that cause strong and easily identifiable behavioral phenotypes. This approach has become possible because of a recent discovery of our group. By combining electrophysiology in Xenopus oocyte and CRISPR/Cas9-based gene editing in C. elegans, we have shown that a single conserved residue controls the activity of all K2P channels from vertebrates and invertebrates (Ben Soussia et al., Nature Communications 2019). This has allowed us to rationally design novel gain-of-function mutants for C. elegans K2P channels and to identify genes that are specifically required to control their expression, biogenesis, trafficking, and subcellular distribution. 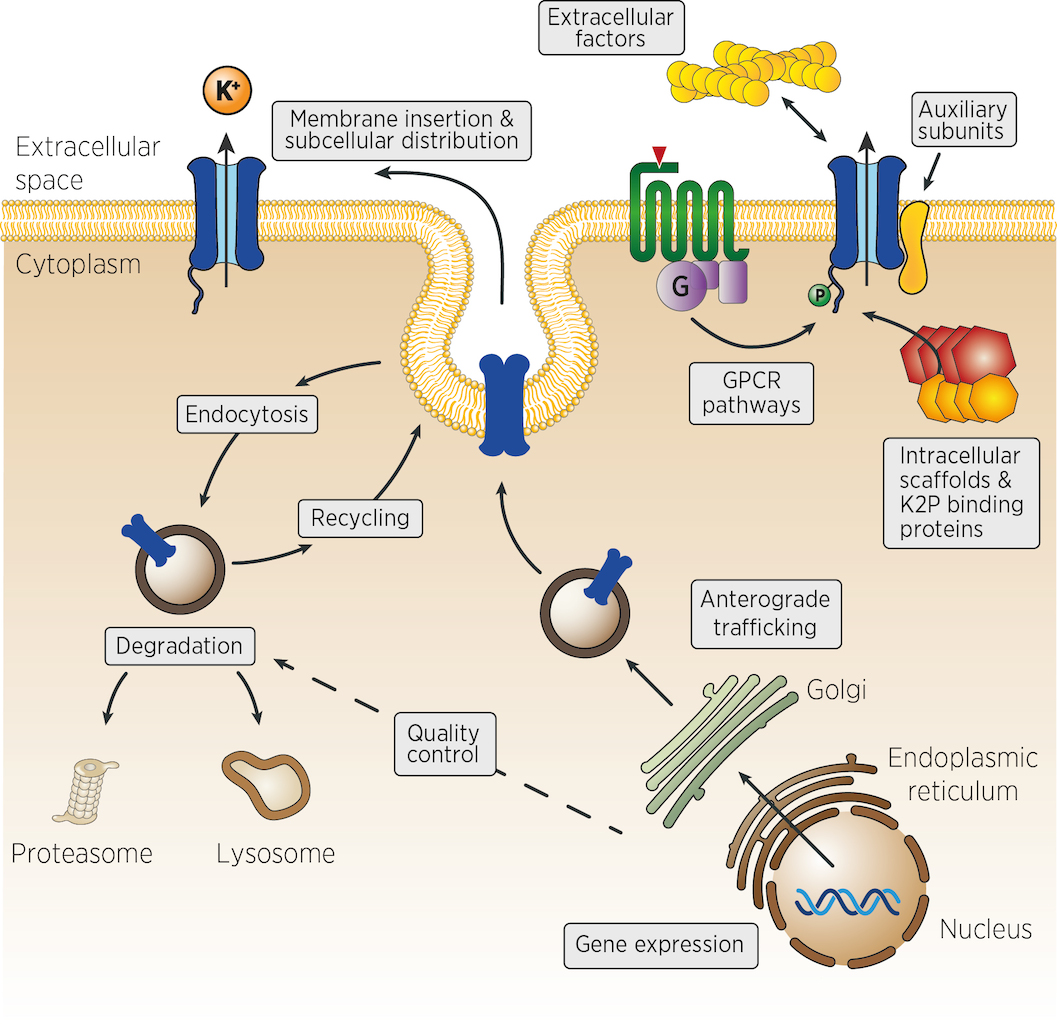 Many different mechanisms could control the number, the activity and the localisation of K2P channels in vivo. From the control of channel expression, biosynthesis and trafficking, to the regulation of membrane insertion, recycling and channel activity at the cell surface (figure). Very few experimental strategies can identify, at once, genes acting in such diverse aspects of cellular physiology. We propose that genetic strategies could address many of these levels of regulation.

Genetic approaches have been vastly underused by past research focusing on K2P channels. Yet, genetic screens in model organisms such as flies and worms are ideally suited to dissect complex cellular processes and gene regulatory networks in vivo. C. elegans has proven a powerful, integrated model system for the study of synaptic function, development, aging, cell death or gene regulation by microRNAs and RNA interference. Due to its short life cycle (< 3 days), C. elegans is well suited for large-scale genetic screens. In addition, most mutants of neuronal genes are viable, and even paralyzed worms are able to develop and reproduce.

Recent estimates show that 40% to 75% of human disease genes have homologues in C. elegans. Conversely, about 38 % of the ~21,000 predicted genes of C. elegans have clear homologues in humans (Culetto and Sattelle, 2000; Silverman et al., 2009; Shaye and Greenwald, 2011). Because of this evolutionary conservation, the genes or pathways that regulate K2P function in C. elegans should enable us to identify genes or mechanisms that are also relevant to the regulation of vertebrate K2P channels in excitable and non excitable cells.

Using CRISPR/Cas9 genome engineering, we have generated the first knock-in line of a two-pore domain potassium channel. This fluorescently-labeled ion channel is fully functional and visible in vulval muscles and VC motoneurons associated with the vulval muscles and egg-laying system (A).

The regulatory genes we identified belong to a well-known signalling cascade and include a ligand, receptor, processing enzyme and transcription factor. Identifying an entire genetic pathway in a single forward genetic screen illustrates the power of these genetic approaches.

Direct visualisation of a K2P channel in vivo and at physiological expression levels opens the way to further analyse the cellular and molecular pathways that regulate the biology of these important ion channels.

For example, CRISPR-based labeling of the TWK-28 channel revealed and unexpected and fascinating subcellular localisation pattern. TWK-28 channels are found at the anterior tip of individual muscle cells, revealing an entirely unforeseen asymmetry in the organisation of the C. elegans muscle membrane.

Using a forward genetic screen targeting regulators of TWK-28, we discovered a novel link to the Dystrophin-Associated Protein Complex (DAPC).

The Dystrophin-Associated Protein Complex (DAPC) is a major actor of the relationship between cells and their extracellular matrix. Because this complex can physically connect the actin cytoskeleton and ECM proteins, it is generally assumed that its main function is to ensure Cell cytoskeleton-ECM cohesiveness along muscle sarcolemma. This view is still prevalent to explain the pathogenesis of Duchenne Muscular Dystrophy and other muscle diseases resulting from DAPC disruption in patients.

Despite the significant progress made regarding the clinical and genetic dimensions of Dystrophin-dependent physiopathology, the precise molecular, cellular, and developmental functions of the DAPC are not yet fully understood.

As part of a project funded by AFM Téléthon (Alliance MyoNeurALP), our group is using state-of-the art genetic and imaging tools in the model nematode C. elegans to challenge the simplistic view of a predominantly mechanical role of the Dystrophin-associated protein complex. In fact, our results suggest that the DAPC may be at the heart of cellular mechanisms that precisely define subcellular cortical domains allowing membrane proteins to be compartmentalized within a single cell.

Indeed, by systematically analyzing the subcellular distribution of membrane proteins and ion channels using CRISPR/Cas9 gene editing, we have discovered that specific subcellular compartments are constructed at the surface of muscle cells by the Dystrophin-associated complex. In turn, ion channels and neurotransmitter transporters are recruited to these distinct subcompartments, likely providing them with specific electrophysiological properties.

This striking example of membrane compartmentalization was entirely unsuspected and raises a number of exciting questions. 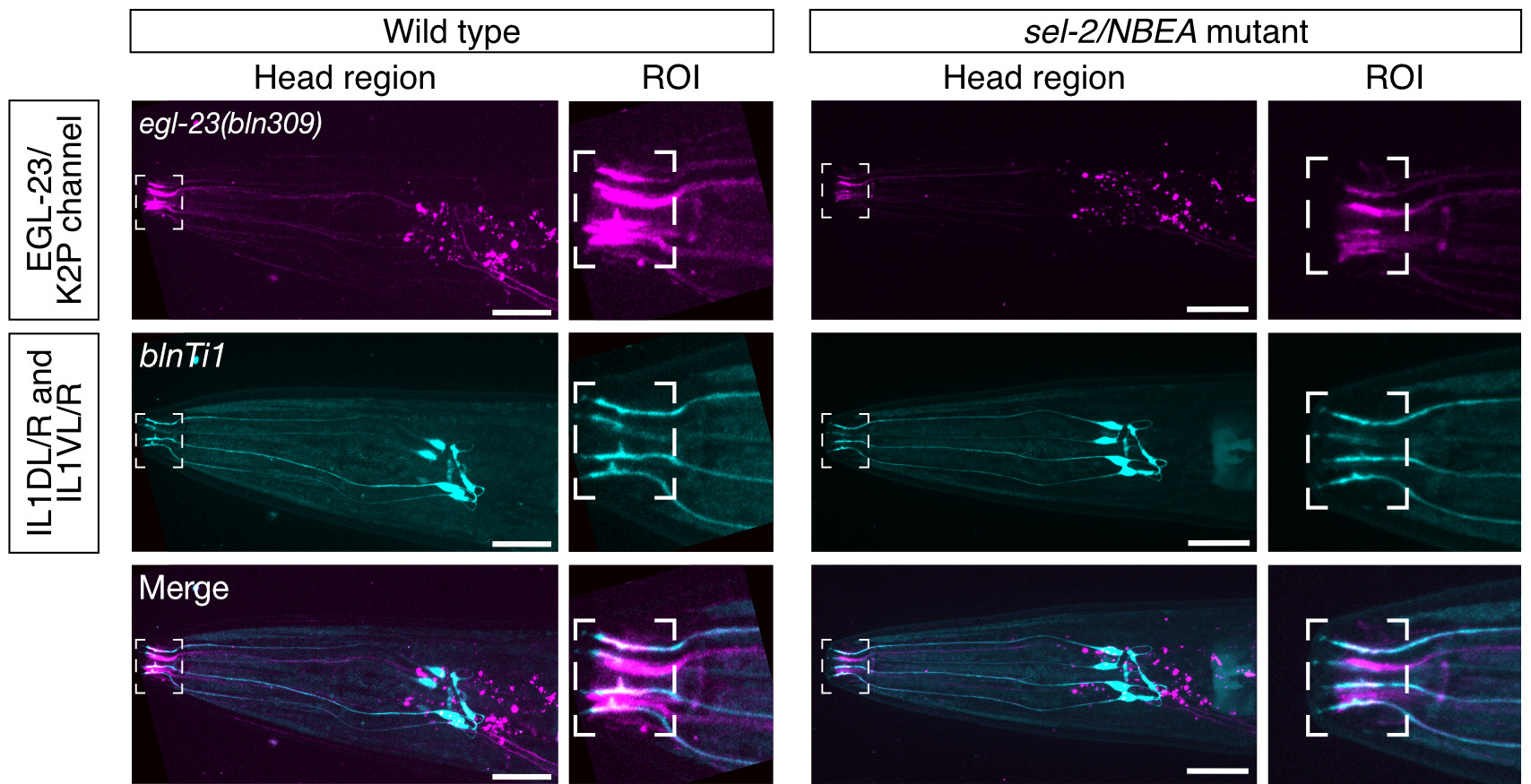 Neurobeachin is a brain-specific protein required for vesicular trafficking, synaptic structure, and synaptic targeting of neurotransmitter receptors. Neurobeachin mutations have very recently been identified as a genetic cause of autism, neurodevelopmental delay and early generalized epilepsy, now known as NEDEGE (Mulhern et al., 2018).

Many of the 24 cases described in this cohort were still young children at the time they were reported. Thus, we currently only have a very limited understanding of the range of human disease phenotypes and the natural history of NBEA encephalopathy. It is therefore essential to pursue in-depth clinical analysis based on neuropsychological evaluations and electroencephalography to delineate in richer breadth and depth the clinical expression of this recently discovered neurological disease.

While most reported probands carry strong loss-of-function alleles, single point mutations in conserved Neurobeachin residues are also found. Determining pathogenicity of these missense variants poses a major challenge, because there are presently no model systems, either cell-based or using genetic model organisms, in which single amino acid changes in Neurobeachin can be quickly generated and characterised in their native cellular context, limiting our understanding of genotype-phenotype relationships.

In a collaboration with the NIH’s Undiagnosed Diseases Network, we have for the first time used state-of-the-art gene editing and novel functional assays in the nematode Caenorhabditis elegans, to confirm the molecular diagnosis of a patient carrying a de novo variant (Boulin et al., 2021). Indeed, we demonstrate that mutating this single conserved residue has the same effect as a complete knock-out of Neurobeachin in the worm. Our findings thus open the way to study the functional impact of human genetic variants of Neurobeachin using the powerful genetic tools available in C. elegans.

In this project, we propose to combine clinical and fundamental research approaches to better understand the pathophysiology of this new neurological disease, identify cellular processes regulated by Neurobeachin, and find new molecular partners that could serve as potential therapeutic targets in the future.